So, I’ve just managed get my hands on the final volume, a proud volume 74, of Tite Kubo’s Bleach. After managing to avoid spoilers for years now, I’ve finally finished the series and feel I need to write something to bid a farewell to a titan of a franchise that I truly loved. This isn’t going to be long and it won’t have any spoilers, so don’t worry if you haven’t read or watched any Bleach but plan to in future. 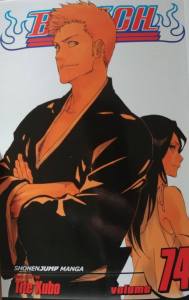 Bleach, for me, was the first anime I watched after I found out what anime was. Back in 2006/2007, I discovered Bleach on the Anime Network, a small, and now long-forgotten relic of Sky TV. After the first episode, I was hooked, and would race home from school to watch Bleach religiously every day. I loved watching the funny and heart-warming moments that the show had alongside the incredible battle sequences, and this anime, together with those from my childhood, really helped to push me along the road of otaku greatness, and I owe Bleach a great debt of gratitude for that and for further kindling in me my love of anime. I’ve been a collector of the Bleach manga for some time and have always waited for the next physical volume to be released and would refuse to check out any fanart for risk of spoilers. Now that it’s finally over, I feel both sad and happy in equal measure. I’d heard about the fall from grace that Bleach had suffered and the issues between Shonen Jump and Tite Kubo and was expecting the worst when it came to the final chapters. I’m glad to report, despite feeling somewhat rushed, these chapters wrapped up most of the elements quite well. I have my own set of issues with the final villain of the series, but that’s a story for another day.

The fact that it is over now leaves me with a mixed bag of emotions. I’m glad to say that the series got a resolution that I’m relatively happy with, but there’s also a feeling of loss, because one of my favourite series is now truly over. Despite this, I can always turn back the clock to the beginning and start this series all over again – and probably will when I need extravagant sword fights and some truly touching moments to make the day that much brighter.

Well then, I hope some of you out there have a similar appreciation for Bleach as I do and stuck with it until the end. Despite the ups and downs Bleach had during its 74 volume run, this series was something truly fun and it will be dearly missed. I hope this farewell will convince some of you to check out this series, as it’s one that sadly ended on more of a whimper than the high note it deserved. Now then, for the last time, it’s time to say goodnight to Ichigo and friends – and a massive thank you to Tite Kubo for introducing us to the world of Soul Reapers and Hollows, a world we’ll never truly forget.

With that, if you’ve made it this far, thank you so much for reading. Until next time, keep it weeby guys!