Since the days of the Game Boy, Nintendo has held a strong presence in the handheld gaming market. Despite the numerous attempts by competitors, including Sony with their amazing PSP and grossly underappreciated PS Vita, Nintendo has held its stranglehold over the market for almost three decades. However, with the increasing popularity of mobile gaming, Nintendo’s dominance in the handheld market has begun to wane. When combined with the success of the Nintendo Switch and the recent announcement of the Nintendo Switch Lite, there’s little surprise as to why the Nintendo 3DS is finally reaching the end of its lifecycle. Despite this, the Nintendo 3DS boasts a phenomenal catalogue of games that can appeal to a broad audience. Sadly, however, with so many fantastic titles to choose from, some truly outstanding games can fall by the wayside. So, for this week’s trip down the Otaku Rabbit Hole, we’ll be taking a look at three underappreciated RPGs for the Nintendo 3DS that I feel deserve a lot more attention and love than they get. Without further ado, let’s jump right into it!

Our first entry is the fantastic, Dungeon Crawler JRPG, 7th Dragon III Code: VFD. Set in the not-so-distant future, an alternate Tokyo faces the very real threat of a world-ending catastrophe following the revival of the 7th true dragon. As it revives, a miasma is slowly seeping into the world, making its inhabitants sick and eventually killing all life on earth. After a series of events, the player is recruited by the organisation Nodens, a video game company by day, and dragon-hunting organisation by night, in order to become a Dragon Hunter. Your task is to collect samples from the other true dragons, all of which residing in different time periods, in order to fill out the Dragon Chronicle, humanity’s best bet to combat the looming threat.

Despite its name, 7th Dragon III is the first entry in the series to find its way West, and it definitely makes a great first impression. Characters are crafted by the player as and when you want, allowing you to choose between a set of pre-designed sprites of different species, a huge selection of voice actors and a variety of quirky classes. Each character is dynamic and incredibly stylised in their design, and the classes are something altogether different from the traditional. Ranging from the Duelist, where the luck of the draw is key to which attacks and skills you can execute in a turn, to the Agent, who can hack enemies to manipulate the flow of battle, this game’s battles can become incredibly interesting. The dungeon-crawling is played out in third person, as are the battles, meaning you get to see your team deliver devastating attacks in all their glory.

The story is well written and draws you in with its cast of interesting and, frankly, bizarre characters that provide some well needed comic relief to refresh the palette, bringing you back again and again. The OST leans more on the techno side, but the soundtrack lends itself well to the setting and overall aesthetic of the game. If I did have one minor complaint, it would be that there’s very little voice acting in this game, which would have been a nice addition to the overall experience, but this is a very small nit-pick in the grand scheme of things.

This niche JRPG is a great pick for fans of the genre, even if it won’t necessarily endear itself to a wider audience. Despite this, if you’re in the market for a gorgeous, stylish RPG on the 3DS with a well executed story, then you can’t go far wrong with 7th Dragon III Code: VFD.

This little number is an interesting and unique take on the RPG genre, where your journey is purely what you make it. Set in the fantasy world of Reverie, you are thrown into a quest by the King of your land – a quest to discover the cause of the meteors that are plaguing this world, called Doomstones by the locals. These Doomstones have the power to make the local wildlife go wild and evil with their power, which causes no end of problems for the locals. As a result of this quest, you set out to live your life, get a job and maybe, just maybe, save the world from catastrophe while you’re at it! Joined by a mysterious talking butterfly, your journey quickly grows as you travel between diverse locations and make new friends along the way.

You have total freedom to build your character from the ground up and choose between multiple classes, making use of all of their unique skills. These classes are separated into three groups: the more traditional combat classes such as the mercenary and hunter, where you gain the strength to fight the enemies that roam the wilds; the gathering classes like the miner and angler, where you can collect raw materials; and finally, the creator classes like the tailor and the cook, where you can use the raw materials gathered on your journeys to craft new items, weapons and armour to make you even stronger. This three-way class system plays well as this makes for a satisfying feedback loop – the more you gather, the more you can craft and the stronger you become, thus letting you explore new areas and gather new materials (and so on). How you level up these classes will also vary depending on the job, so combat classes will level up as you fight, while the less traditional jobs will level up as you work. The higher the level of your job, the more proficient you will become, and the easier the game will be. And believe me, you’ll want to level up all the jobs in turn because if one is under-levelled/ underdeveloped, it will make Fantasy Life CONSIDERABLY more challenging. You’ll thank me for it later!

The story is quite light, having enough to keep you invested and moving forward with some fun and interesting plot lines that interweave well, even if it doesn’t completely redefine conventional storytelling. The characters in this game are also fun and incredibly endearing, providing you with one of your main sources of money and experience in the form of side quests. These quests give you excellent opportunities to level up jobs or become strong enough to face the next main story section.

This game is a truly excellent gameplay experience and is addictive from start to finish. There is also additional DLC content for those who aren’t happy with ending their time with this game after the story, so if you’re wanting something familiar yet wholly different, then you won’t go wrong with Fantasy Life! 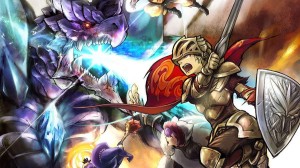 Final Fantasy Explorers is a game that borrows heavily from the Monster Hunter series of games. By taking that innate sense of joy that comes from fighting massive monsters that seem almost unconquerable, and combining it with that Final Fantasy flair, it provides a truly unique experience that really helps set it apart from the crowd. The story is set in the land of Amostra, a land where crystals are everywhere. Joining the Explorer’s Guild, the protagonist sets out to gather the power of the crystals through undertaking quests and fighting Eidolons – the familiar summon spirits of the numbered Final Fantasy titles. However, for those looking for a grandiose Final Fantasy narrative, you should look elsewhere. This game’s story is a light affair and is far from the focus here, merely providing some minimal window dressing for the main experience – that is, the gameplay.

As an explorer you have the duty of undertaking quests and setting out into the world of Amostra to fight the classic Final Fantasy monsters and Eidolons that make this world their home. You, as a single explorer, may find that somewhat difficult at first, but you have a fair number of tools at your disposal to make your journeys all the easier. First of all, the job system that makes a welcome return from some of the classic numbered entries. As is the case with many Final Fantasy titles, both mainline and spin-off, jobs are a key part of the Final Fantasy experience, and Final Fantasy Explorers is no different. The 21 jobs on offer will include something to appeal to every playstyle, be that defensive, ranged, magic or close combat. While combat is important, making full use of buffing, debuffing and healing is essential for success on your journey, meaning that you should aim to have a balanced team loadout. The biggest benefit of Final Fantasy Explorers, however, is the freedom to pick a job, master it and make it your own. Personally, I favour the Machinist class that allows you to buff your character while attacking at a range, making for some incredible moments in the heat of battle. The jobs system isn’t the only weapon in your arsenal, however, as you are also able to recruit monsters to join you in your journeys that can help cover the weaknesses of your chosen job. This is an interesting, if tried-and-true, take on party-building, which allows for even further customisation of your gameplay experience.

Final Fantasy Explorers is a fun and engaging spin-off title that allows you to experience Final Fantasy in a different way. It has some incredible replayability, allowing you to continue diving into the world of Crystals and Beasts long after the story reaches its inevitable end. As is the case with many Hunter games, the search for improved items, weapons and armour through repeating quests time and again provides its own reward for players, even if it can get repetitive fast. While maybe not a title for prolonged play sessions, Final Fantasy Explorers provides some fun gameplay for short bursts and is definitely a fine example of what can be done when you tweak the Monster Hunter experience.

Well guys, we’ve reached the end of our list. If my words have inspired you to play any of these titles, then please let me know what you think. If you have any RPGs that you feel are underappreciated on the Nintendo 3DS, then please leave a comment below as I’m always on the lookout for something new to play. With that, I hope you’ve enjoyed this week’s trip down the Otaku Rabbit Hole and, until next time, keep it weeby everyone!