So, after a few months away, it’s that time once again, time to dive deep into the cavernous depths known as the backlog, face our demons (or whatever other JRPG beastie we faced this month), and hopefully come out the other side with more EXP than when we started! Well, grab your Potions, Antidotes and make sure you have ample Phoenix Downs at hand, because this week on the Otaku Rabbit Hole, we’ll be facing off against some tough opposition. Now, let’s take some time and assess how much damage we dealt to the backlog Super-Boss this month, and without further ado, let’s jump right into it!

So to start this month off, I decided to jump into something familiar with the Hyperdimension Neptunia Re;Birth games, a game series, for those not in the know, that has anthropomorphised console’s duking it out in literal console wars. And what better game to start with than the one without the titular Neptune in the lead role? While I have played through the original Hyperdimension Neptunia Trilogy on the PS3, the Re;Birth games have sat waiting patiently in my backlog for a chance to shine, and this month, boy did they shine! This game is a remake of the second game (Hyperdimension Neptunia mk2), acting as a series retcon, as it effectively reworks the story by introducing players to a new cast of CPU candidates, and where the original cast of CPUs (Neptune, Blanc, Vert and – best girl – Noire) have all been imprisoned. It’s therefore up to the CPU candidates, the little sisters of the CPUs, to rescue their big sisters and restore harmony to the land of Gamindustri.

The game is very heavy on the fanservice, and overall the stakes aren’t that high. While the fanservice can occasionally verge on sleazy, the humour is very self-aware and, as a series, is often happy to break the fourth wall with gaming-related jokes and references. Now, while this series certainly won’t be for everyone, if you love small, subtle references to other video game series and a not-so-light dusting of fanservice scattered throughout, the Hyperdimension Neptunia games might just be worth checking out.

I started my playthrough of Re;Birth 2 back at the end of July and it caught me totally by surprise – I literally couldn’t put it down! The battle system is just as fun and intuitive as ever with its turn-based action mechanics coupled with stylish animations. Despite the often excessive need to grind levels, this hardly effected me at all. Instead, I found myself wanting to dive ever deeper into the game to enjoy the battle system to its fullest and see where the story would take me. I came tantalisingly close to finishing the game this month, but made the decision to hold off on the final boss and grind out a few more levels and some trophies too for good measure, just to make sure I mop up all the possible endings I can get my paws on. With that being said, I’m pretty hopeful that, by the next Battle of the Backlog, I’ll be able to report that this game will be complete!

So, for this one I’m going to cheat a little and merge these two games into one entry. By now, if you’ve been following me on this blog or on my social media, my love (read: obsession) for the Atelier Series will come as no surprise. With the soon-to-be-releasing Atelier Ryza just around the corner, I recently decided to marathon through all the Atelier games I own, in order to build my excitement for Atelier Ryza to a fevered crescendo. After making a pretty significant dent in my collection, it was time once again to dive back into the world of Lydie and Suelle, to hopefully make some more progress. While I did manage to do so, I always found my mind wandering, or found myself grinding more than I really needed to rather than progressing the story as I should have been, meaning that I didn’t make anywhere near as much progress as I would have liked this month. I’m now sitting comfortably in Chapter 8, meaning that I’m well over the half-way point, but, like I mentioned previously, while I love the characters and the story is pretty good too, there’s still SOMETHING that hasn’t quite clicked with me for Atelier Lydie and Suelle, and I still can’t quite put my finger on it.

However, despite Lydie and Suelle not quite hitting the right note for me this month, I desperately wanted to start another game in the Mysterious Trilogy to find out if Lydie and Suelle was the odd one out, or if I’d stumbled upon an Atelier trilogy that wasn’t quite right for me. So, after a little debating, I decided to take on Atelier Sophie, one of the more beloved titles among fans – and after only a few hours with the game, I can definitely understand why!

Atelier Sophie collects everything I love about Atelier games: the main protagonist is fantastically endearing, the setup for the story and its direction is engaging, the ENTIRE cast of characters is beyond lovable, the musical score is stunning and that’s to say nothing for the soft yet striking visuals! One thing that I found strange to begin with was the slight variations to the battle system, but after playing with it for a few hours, honestly, I’ve come to find it a refreshing change of pace. The alchemy system present in Lydie and Suelle (which I’m not a fan of in that game), is a much simpler affair here and I’ve found myself synthesising more and more thanks to its addictive nature – I don’t know why, but in Atelier Sophie, it just works! Additionally, thanks to a near non-existent time management system, I’ve been given almost infinite freedom to explore and experiment, letting me sink further into the game with a comfortably laid-back pace – even if this does mean that I sometimes get lost in the world and forget to advance the main story (oops!). I’m nowhere near the finish line yet with Atelier Sophie, but this entry is most definitely one that has captured my heart – I’ve fallen head over heels in love with this game and can’t wait to continue with it in the coming month!

Anime, Netflix and Movies (oh my!)

The End of Evangelion – COMPLETE

After my recent review covering the Netflix release of the Neon Genesis Evangelion anime, many were quick to recommend that I check out the movie that would give the fullest overall Evangelion experience. As a small aside, I must admit that I would have loved to check out the End of Evangelion movie before now, but luckily this month I FINALLY found the time to jump in and check out what more the world of NERV and Evangelion had in store for me – and boy, what a roller coaster it was.

Despite how much it messed with me, I can honestly say that I loved it. Seeing as the movie is widely considered to be the true ending of the anime as it should have been, had the original production not encountered the time and financial issues that forced what ended up being released, I would obviously recommend anyone check it out to get the fullest experience, but it’s definitely one that’ll mess with your head. This movie is dripping in religious symbolism, and there will be more than a few moments that will shock you. I, for one, found myself at the edge of my seat throughout and thoroughly enjoyed yet another dive into the world of Evangelion. With the original story now wrapped up with a nice if not-so-tidy bow, I think now it’s time for me to begin looking into the rebuild movies and for me to check out the manga in order to feed my ever-growing obsession with the Evangelion franchise! 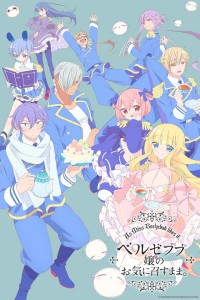 Way back in December of last year, I wrote a little review covering the first volume of the manga As Miss Beelzebub Likes, a romantic comedy that hit all the right notes for me. Since then, I’ve devoured the manga volume by volume with every passing release and, quite honestly, it’s one of those series that makes me feel all warm and fuzzy, which has lead to it quickly ensconcing itself among my favourite manga titles. I’m sure that you can imagine, then, my utter delight when, while perusing through Crunchyroll’s extensive catalogue, I discovered that this series had received an anime adaptation!

While many anime adaptations are often cripplingly disappointing in one way or another, I’m very pleased to report that this isn’t one such adaptation. Despite a slight downgrade to the art style, the animation with its beautiful pastel colour pallet that just makes it’s characters pop, alongside an excellent sense of humour, makes for an all-around solid package. I’ve already raced through all 12 episodes of its tragically short run and, I honestly can’t recommend it enough – if you’re in the market for something fun and heartwarming, then please do check it out!

With that, we’ve reached the end of this quest, and yet another Battle of the Backlog has been fought, and won! With new equipment and a few more levels under our belts than when we started, thanks once again for joining me on this week’s trip down the Otaku Rabbit Hole. I do hope you’ve enjoyed, and if you did, then please consider sharing! With that being said, until next time, keep it weeby everyone!