There are very few experiences out there that aren’t made better with music. I mean, think about your favourite game, or movie, and just imagine what they would be like without the musical score that accompanies every tear-jerking moment or action-packed spectacle.

A game’s soundtrack is as integral to a game’s success and impact as its visuals. Great music helps craft an innate gameplay experience like no other and, when done well, helps craft some truly unforgettable moments.

From a personal standpoint, I can say that I’m always drawn deeper into a game’s overall narrative when the musical score has that little something special. Some of my favourite games of all time, such as Final Fantasy X and Xenoblade Chronicles 2, have soundtracks that go above and beyond in elevating them into the realm of greatness.

But here’s the thing. As great as these games are, oftentimes, music acts as the extra seasoning added to an already great dish – it’s the slice of chocolate pie at the end of a meal and the beautiful ribbon used to wrap the overall package in a nice bow. There aren’t all that many games that use music as a narrative device. Hell, even rhythm games falter here, often lacking a story mode all together or having one that would be better off removed!

Well, with that in mind, enter Songbird Symphony, a little indie title developed by JoySteak Studios and published by PQube games, a very special little title that takes music and song and places it front and centre – to great effect.

The game follows Birb, a little, well, bird, who after being raised by his adoptive uncle, Pea the Peacock, decides he wants to find where he belongs. So, with that single ambition in mind, Birb sets out on a grand adventure across his world to find out who he is and find the one place he truly belongs.

Along the way, he meets birds from all walks of life and different species. Following the guidance of the wise old owl, Birb sets out to learn all the songs of the birds. Without delving into spoiler territory, Songbird Symphony is full of fun and happy moments but while the highs are very high, the story is punctuated with heart-wrenching scenes that will bring a tear to the eye of even the most hardened gamer – for a game about an adorable baby bird, it’s kinda brilliant.

One of the biggest compliments I can give Songbird Symphony is the fact that the game never feels bland – its world and characters are vibrant and interesting, and what they bring to the game is a unique sense of diversity. Tonally, Songbird Symphony takes full advantage of its cast by bouncing its story beats off its characters’ quirky personalities to continuously maintain the story’s momentum and maintain the interest of the player. It’s expertly done and is often delivered with lighthearted ease, coming off as both charming and intriguing – you learn to love these characters, and you want to play through until the end and see the credits roll.

Enough about the story, what about the gameplay? The gameplay segments can be broken into two distinct styles: exploration and singing.

Birb is travelling far and wide on his journey to find his one true place to belong, so it stands to reason that he would have to run, jump and solve puzzles to get through certain areas, right?

In the exploration sections that make up the majority of the game, Songbird Symphony has you jumping from platform to platform, solving some, at times, brain-boggling puzzles as little by little, you bring music back to the land as you make your way from point A to point B.

This is often done through cracking certain minor puzzles but will result in the music building piece by piece. The thought that has gone into this relatively minor aspect is incredible!

However, if you think that once you’ve played through the game that’s that, you needn’t worry – Songbird Symphony might seem a little linear at first glance, but the hidden birds and collectable feathers will help alleviate all your concerns.

Hidden throughout the game are a number of feathers, each of which belonging to one of the different bird species scattered throughout the game. While some birds you’ll meet on your adventure, others are hidden in hard-to-reach places, and these birds you’ll definitely want to go out of your way to find. They offer nothing in terms of the story, but they are funny, funky and overall offer an interesting diversion from the main story.

Now, while the platforming is tight, responsive and fun, I’m sure that, like me, this won’t be the part that initially drew you into Songbird Symphony. The question remains: how do the musical sections hold up?

Throughout the game, Birb will meet many other birds, and when he does, he’ll often join in with them as they sing their own special song. This entire experience has a certain childhood magic, feeling like something plucked straight from a Disney movie, and it just made me smile.

While the songs at the start are simple enough to help ease new players into the game, as you progress through Songbird Symphony, you’ll steadily unlock new notes, which slowly but surely ramp up the challenge. Some of the later songs are devilishly tricky and will test your skill as you frantically tap at your controller in desperate hopes of hitting the right notes. 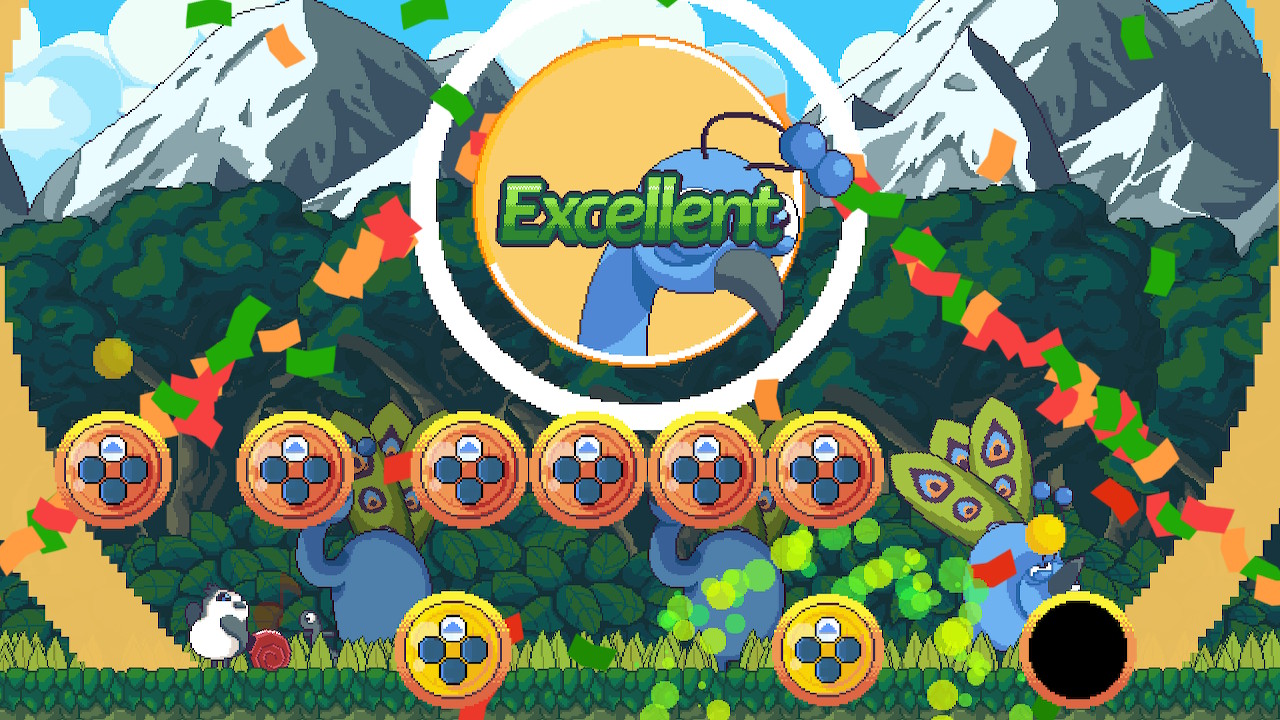 I’ll admit there were one or two songs in Songbird Symphony that I found to be utterly insane (I’m looking at you, final boss!!!), but overall, if you’re comfortable with rhythm games, you’ll surely feel right at home with this title.

Luckily, for those players who haven’t yet mastered rhythm games, Songbird Symphony won’t punish you with a “Game Over” for missing a few notes and will only dock your score a little at the end. While this is something I have criticised rhythm games for in the past, Songbird Symphony is a hybrid rhythm-platformer, so by allowing a player whose interests are more story-focused to skate through the rhythm sections keeps players engaged and circumvents any potential frustration. It’s a smart move and makes the game accessible to all types of players.

Further adding to the replayability of this game is the fact that every song is replayable, meaning if your ultimate goal is to get a perfect score one every last song in this game’s impressive roster, you can aim for that, and I wish you the best of luck with that!

Now, the question has to be asked, how does the music in Songbird Symphony hold up? Rhythm games live and die by their music selection, after all.

Well, as far as diversity goes, Songbird Symphony absolutely nails its song selection. There are all sorts of different tracks to appeal to almost everyone’s tastes. However, as is the case with most rhythm games, not every track will appeal to everyone, but that’s not an issue, because there’s a lot more to enjoy. 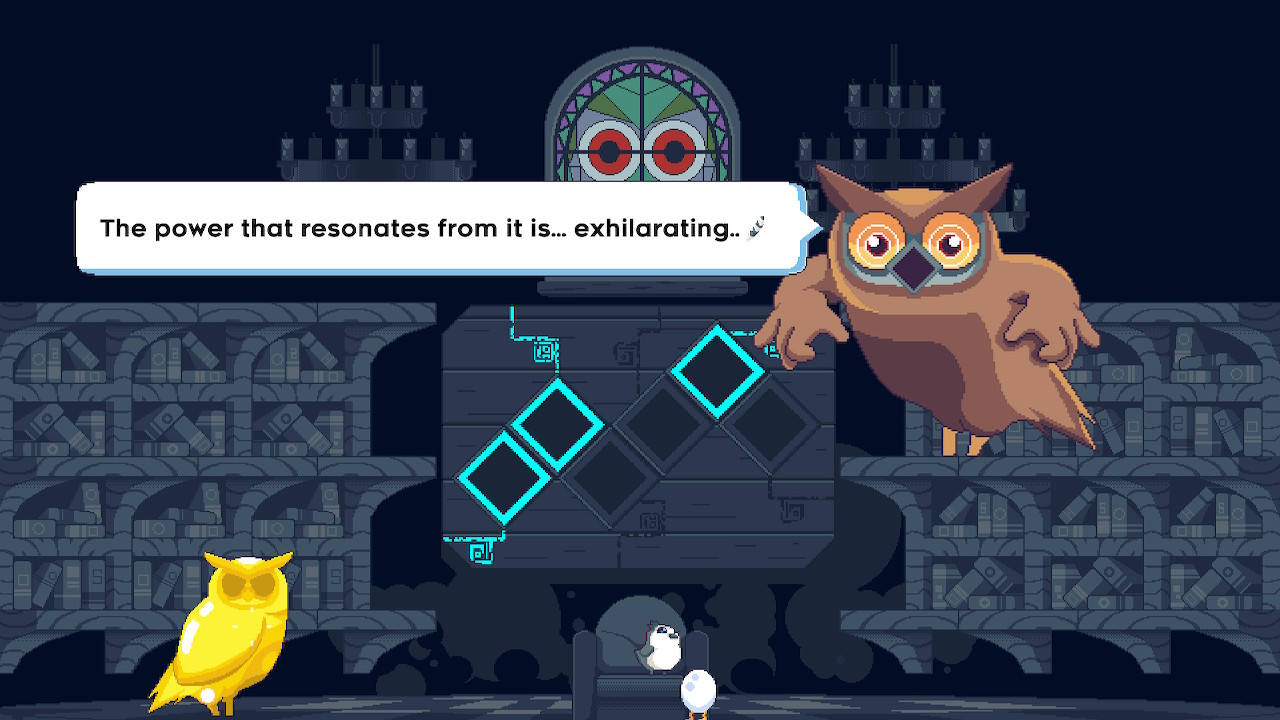 So, I think that brings us to the important part of the review – what are my takeaway thoughts from Songbird Symphony?

Songbird Symphony was an absolute delight from start to finish. Getting to experience a sweet and surprisingly deep story about finding a place to belong coupled with Disney-esque musical numbers scattered throughout made for a fantastic experience. Controls were tight and responsive, and, as far as this review goes, I had a very little issue with this game.

Ultimately, all I can say about Songbird Symphony is that it surprised me in the best way possible. I went into this game blind with zero expectations, neither good nor bad, and yet I found myself diving back in every chance I got with a big goofy grin plastered across my face.

It’s a great game that’s suitable for all the family. If you haven’t heard of this game before, or have been holding off checking it out, you should 100% pick up this little indie title – it’s more than worth the price of admission!

With all that being said, thanks again for joining us on this week’s trip down the Otaku Rabbit Hole, and we hope you’ve enjoyed your time here. If you did, that’s amazing, and please consider sharing. If you didn’t, then please get in touch and let us know why. We would love to hear your thoughts! Thank you all once again and, until next time, keep it weeby everyone!

DISCLAIMER: ALL CREDIT FOR THE IMAGES USED IN THIS REVIEW IS GIVEN TO THEIR RESPECTIVE OWNERS.